While looking for a new diet plan, the Jillian Michaels diet piqued my curiosity. I’m a Biggest Loser fan, I have been watching since the show premiered in 2004. Not for the same reasons as my friends who liked to gawk at the contestants but for the inspiration that I got watching these people triumph over battles with demons that most overweight people have. The reality show pits obese contestants that are competing to see who can lose the largest percentage of weight and a huge cash prize, most recently $250,000.00. to help get these people in shape, the reality show features two trainers, one is the sweet smiling Bob Harper and the other… the seemingly not so sweet and smiling Jillian Michaels. 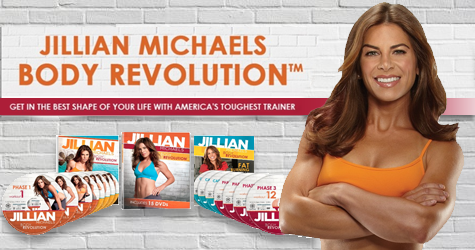 Michaels quickly gained a reputation as the “mean trainer” on the show, the trainer that every contestant feared or at least that is the way the editors of the show would have you believe. When Ms. Michaels left the show after 11 seasons and started to reveal her softer side on other TV appearances and the five books that she ultimately released, America discovered that she had a kinder, gentler side. Today, she is regarded as one of the most popular fitness experts in America.

The tough exterior was probably developed when she had to be strong while she was dealing with bullies that were making fun of her own weight issues. The now super-fit woman was almost 175 pounds when she was twelve years old. Her small five foot two inch frame made that extra weight even more pronounced. But the tough fighter that we know from the TV show was born from those struggles as she learned how to get into shape, not to worry about what other people thought of her and that she had a passion for helping others discover their fit inner self.

Why are you going to choose failure when success is an option?”

Is something we have heard Jillian get in a Biggest Loser’s face and scream because she has felt the pain of being out of shape and out of control and tasted the satisfaction of gaining control of one’s weight issues. This is a woman who truly has walked in the shoes of being overweight. She has felt like she was so far from her goal that attainment was unreachable. The Jillian Michaels diet is a way of life for her. It is part of who she. Unlike many fitness and diet gurus,  Jillian is one of us, she has felt the pain… she gets it!

is the reason that she has had the most winning contestants in the show’s history, she knows how to push the buttons, how to motivate people to find the reason “why” they want to lose weight and get fit… and then she will help them form an emotional attachment to that “why” to keep them on track.

The Biggest Losers contestants lose weight fast. Contestants on the show regularly lose up and beyond ten pounds each week, making the show a target for complaint from the medical community. It has long been regarded that a loss of one to two pounds a week is more healthy and realistic for long term weight management. So if the medical experts say that the trainer has it all wrong, why does she have such a strong and loyal following?

Because Jillian knows her stuff! Michaels has created a fitness empire of quality products that just work to help everyday people get in shape. She has written books like: Winning by Losing, Making the Cut, and the Mastering Your Metabolism series which feature the program, cookbook and calorie counter. She has hosted a weekly radio talk show in Los Angeles and has released over 15 fitness DVD’s since she landed on the fitness scene in 2004.

While some plans focus on diet and touch on fitness, some on fitness and lightly cover diet, this diet and fitness plan consist of diet, exercise and behavior modification. It is the balance that has helped Michaels clients reach their goals, all the pieces of the puzzle are brought together to form the winning combination of long term health and fitness. One part of Jillian’s diet equation consists of determining the…

Ratio of proteins, carbohydrates and fats that metabolize most efficiently for each individuals body makeup. Body types are split into two categories slow oxidizers, those that require a larger ratio of carbohydrates in their meals and fast oxidizers. I’m sure you guessed it is the fast oxidizers that do better with a smaller ratio of carbs on their plate. Once your body type is determined from a series of questions, you can start planning out sample menus.

A minimum of 1200 calories every day at 4 hour intervals The reason you eat every four hours is because it is easier for your body to metabolize smaller meals at a higher frequency than to burn 1 or 2 larger meals for the day. It’s kind of like throwing a big log (read big meal) on a small fire or smaller kindling (small meal) – the kindling will go up in flames fast while the log slows the fire down and may even put it out. Efficiency is the key.

Are you with me so far, and ready to get started? There is one thing to consider, something that isn’t talked about enough in fitness circles and that is the effect of processed foods on your diet.This is something that has been well hidden from American consumers and perhaps one of the biggest reasons that some people have failed to lose weight in spite of good intentions…what is that ugly secret? Processed foods… Do yourself a favor, take a walk around your favorite grocery store…

Bring your reading glasses, it’s time to read some labels! You will be surprised at how well hidden these ingredients are. What are we looking for? Palm oil, shortening, high fructose corn syrup, artificial sweeteners, Butylated Hydroxyanisole (BHA), Sodium Nitrates and Sodium Nitrites, Sodium Nitrates and Sodium Nitrites, and MSG. Where will you find them?… EVERYWHERE! Most troubling is often they are found in the very foods that are being marketing to us as “healthy low fat” alternative foods.

Study upon study has determined that there is a correlation between processed food intake, weight gain and chronic disease. Processed foods make up the bulk of the American diet, is it any wonder that we are an overweight nation in spite of the multitude of fitness centers and weight loss books being read?

Jillian Michaels diet programs suggest eliminating processed foods and empty highly glycemic calories such as white flour products, rice, pasta and bread. The farther you get from highly processed food that are designed for long shelve life and profit margins, the faster you will see results in your weight loss efforts.

So now that you have an idea of what the Jillian Michaels diet is all about, I would suggest that you look into some of here fitness programs such as the popular 30 day shred. This is a 60 minute DVD that mixes cardio and strength training. The plan puts a strong emphasis on the abs and some have claimed to see as many as 20 pounds of fat falling off their body in 30 days. Have you ever wished you could become a Biggest Loser contestant so you can…

by trying Jillian’s latest program: Body Revolution. This is called Jillian’s 90 day extreme weight loss system. The Body Revolution System covers all bases and comes with 15 DVD’s, meal plans, calendars and even an optional online club membership with every tool and resource that you might need to get into the best shape of your life. The only thing missing is the Biggest Loser gym and you can even replace that with some hand weights and resistance bands, which are optional but definitely designed to work within the system.


When it comes to losing weight and strength training, following the Jillian Michaels diet plan, using her DVD’s or the
complete Body Revolution System.