Triglycerides are a type of lipid which derives from glycerol and three fatty acids.

They are found in many foods which we consume every day and form the main constituent of vegetable oil and animal fat. This means that someone who has a large amount of oil and fat in their diet will most likely have high triglyceride levels within their body.

This is because the body stores fat in the form of triglycerides as an alternative energy resource. These energy stores are vital as, when needed, they are broken down and liberated into energy; however an excess of triglyceride levels is bad news for one’s health.

The health risks that come with having high levels of triglyceride content are very serious; they include heart attack, stroke and other serious cardiovascular disease. 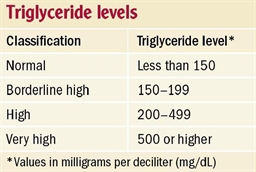 Research and statistics have shown that the main health problem caused by high triglyceride levels in the body is by far cardiovascular disease. High levels of triglyceride increase the chances of developing heart disease and also increase the risk of developing arthrosclerosis (thickening of the artery walls due to deposition of fatty acids).

Arthrosclerosis dramatically reduces the elasticity of the artery walls and therefore narrows them and increases the blood pressure; this is likely to contribute to a heart attack or stroke.